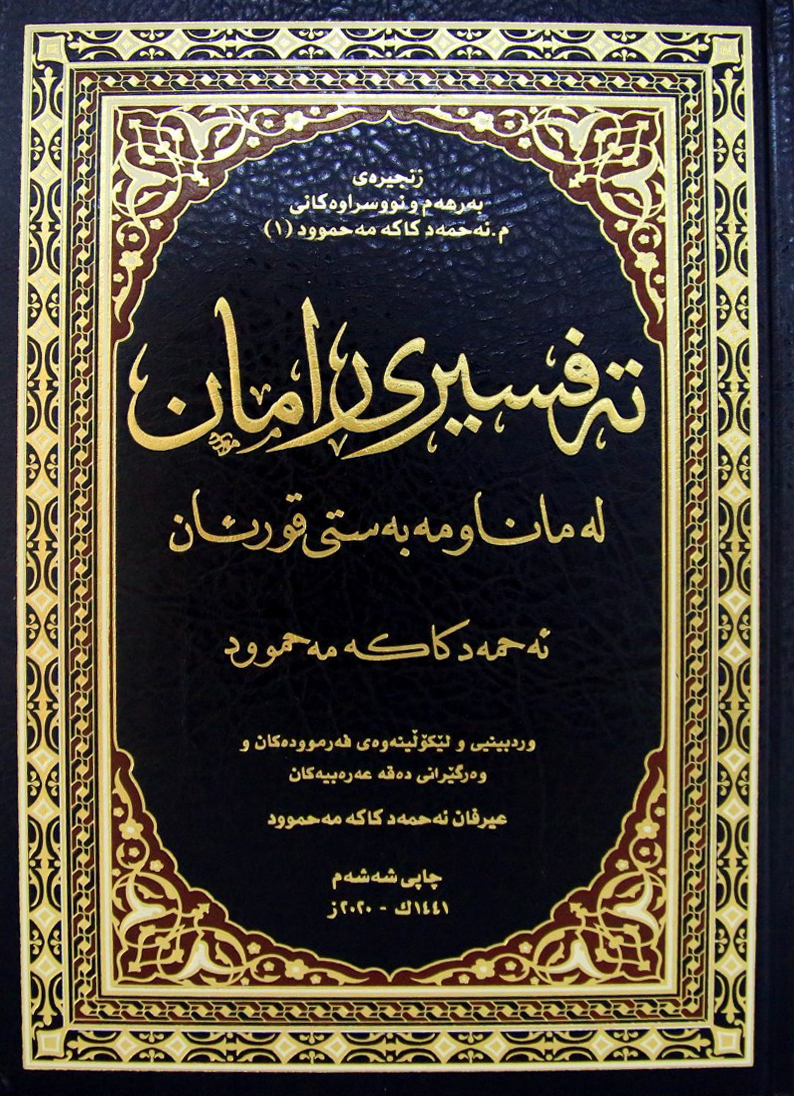 Calling for Islam – Answering doubts and misinformation of foes of Islam - scientific miracles in the Holy Qur’an and Hadiths
Objectives:

@ Our objective: is to call individuals and society to the teachings of Islam and safeguard moral values and the religious sanctity as well as defend the final message of the divine prophets which are the holy Qur’an and the authentic Hadiths of our prophet (Peace be upon him).

@ The missionary project (Da’wah) of Sheikh Ahmed Kaka Mahmood (blessing of Allah be upon him), was founded in (1429 H) posthumously.

@ The project is to convey the teachings of Islam to people, answering the questions and doubts, rectifying misinformation about Islam and focusing on scientific miracles as well.
@ It is to serve and educate Muslims wherever they are in the world in general and in Kurdistan Region in particular.
@ To Translate and interpret tens and hundreds of videos of religious scholars in the field of da’wah and answer questions, doubts and scientific miracles.
@ To publish and broadcast religious seminars, conferences and occasions in all cities and towns in Kurdistan Region, especially post live streams on the Facebook page of Shiekh Ahmed Kaka Mahmood, which is an active page and it has prominent viewers.
@ Those projects are under the supervision of several religious scholars, doctors and experts in various fields and they have many active members from the skillful and sincere youths who work in different fields of those projects.
The scope of work:
@ The project includes of the following important fields of work:
1.  Printing and publishing the corpus of Sheikh Ahmed especially (Raman Interpretation of the meanings and the aims of the Qur’an), (women and women affairs in Islam), (700 legal questions and answers regarding women), the fatwas and the opinions of Sheikh Ahmed Kaka Mahmood), The process of translating Raman Interpretation of the Qur’an into Persian), (social problems and their solutions in Islam), (politics in Islam), (answering the questions, doubts and misinformation about Islam), (Peace in Islam), (Islam or socialism solves problems), and (know the Jews).
2. Designing and opening a website: in (1429H.) versus 2008, the corpus, all the collocations, fatwas of Sheikh Ahmed uploaded in the website.
3. Creating the website of “Dangi Islam” means voice of Islam: Dangi Islam website is the first and the greatest Islamic da’wah website in Kurdish and it has more than 5000 articles and fatwas. It was designed in the UK in 2002 and it is now part of the da’wah projects of Sheikh Ahmed Kaka Mahmood.
4. Creating a Facebook page under the name of: Sheikh Mahmood Kaka Mahmood at the end of (1433 H.) which coincides with 2011. Right now it has more than (2,500,000) likes and followers it is considered as the biggest and the strongest Kurdish Islamic Facebook page in Kurdistan Region and Iraq.
5. Creating a special YouTube channel for Sheikh Ahmed: it was designed in (1434 H.) in other words in 2012 and now it has more than (35000) subscriber. Fortunately, it has its own published work, and more than (6000) videos have been posted on the Sheikh Ahmed’s YouTube Channel and it has more than (4.000.000) viewers.  In addition, tens of video series regarding answering questions and doubts about Islam, translated religious video series and tens of other types of religious lectures by Dr. Zakir Naik, Ahmed Didat, Sheikh Ahmed Kaka Mahmood, Sheikh Muhammed Barzinji, Dr. Abdulwahid Muhammed, Sheikh Hawre and Nuraddin have been posted and published in this channel.
6. Sheikh Ahmad’s page on Instagram: was created in (1437 H.) which coincides with 2015. The Instagram page of Sheikh Ahmed Kaka Mahmood has more than (375,000) followers now and it is one of the active pages on Instagram.
7. The formal page of Sheikh Ahmed on Twitter: is another Islamic project on Twitter. Right now it has more than (5,600) followers and whatever is posted on Sheikh Ahmed’s Facebook page and his YouTube channel is posted on his Twitter account, too. Fortunately, the voice of Islam is active on those social networking sites.
8. Sheikh Ahmed’s Telegram: another da’wah project of Sheikh Ahmed Kaka Mahmood is creating Telegram account especially for those who live in Iran and who may not be able to reach us on Facebook. This channel was created in 2016 and thanks God it is and active channel and continue on calling people to Islam and spreading Monotheism.
9. snap chat account of Sheikh Ahmed Kaka Mahmood: similar to other pages and accounts, Sheikh Ahmed Kaka Mahmood has his own snap chat account, too. All the video series published on his YouTube channel is directly posted on his snap chat account, too, and thanks God his followers are increasing on his snap chat account.
and thank Allah the god of everything.